2) After reading all this we know about what are suggested by different classical book about Sun in Cancer Sign.

Yavanajatakam—
When Sun in Cancer then native hates own man but works for  under in other man. Native talks stupidly and having lack of determination regarding action. Native cannot stand in one place and delighting in drinking. Native have many types of miseries and suffering from labor or servants. Native don’t stand on his speech, his place, his region. Native hates his father and don’t gets so much physical comfort through women or wife. Native may be suffering from disease related to kapha and Pitta.

Jatak Parijat —
Native will be ignorant.(क्लेशधीरज्ञः so I think it’s meaning is suffering from sorrow and lack of passion). 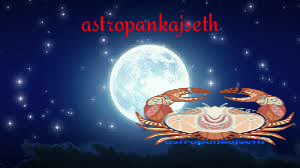 3) Sun is karak of soul and its placed in a watery sign and 5th house lord in 4th house for kalpurush so  it may indicating native may be religious or spiritual from soul. Native have inclination towards get peace of mind through spirituality.
One other meaning of  this placement is native may have inclination towards drinking or other things for getting pleasure of mind but it’s applicable when Sun is affiliated by any other planet. Because both(Sun and Cancer) are Satva gun in character.

5) Sun in Cancer if badly affiliated by others planet then it may cause heart, lounge,  related problems.

6)In kalpurush chart Sun in 4th house doesn’t consider good because Sun in 4th house of kalpurush loss its directional strength. So Sun in Cancer may indicating native may have lack of self confidence. Native may be suffering regarding taking a decision or always  suffering from doubt. Sun is karak of self confidence and it is placed 12th from own house. Further meaning of this placement is native have expense his wisdom.

9)Sun in Cancer Native may be liberal, kind and philosopher from inner hearts.

10) In simple words Sun in Cancer is good regarding Satvagun matters, but not good regarding Fire and water character, It is good regarding placement of a fixed nature Planet in movable sign which reduced some fixablity effects of Sun. Rest depends on House lordship of Sun.
If you are interested to know more about Sun then Click this link and read more articles related to Sun.