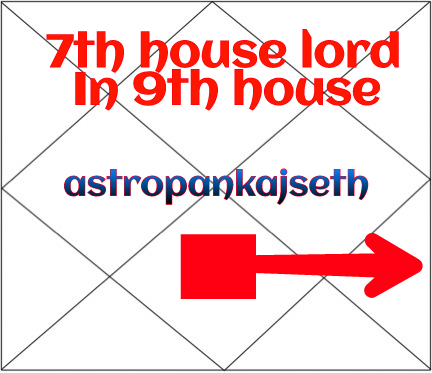 1)Before knowing effect of 7th house lord in 9th house we have to know about Seventh house and Ninth house. As 7th Lord placed 9th from own house so you may read First house lord in 3rd house.

General meaning of this shlok is when 7th Lord placed in 9th house native have union with many women. Native wife will be well combination with native. Native have many undertakings.

4)9th house belong to father and 7th house belong to marak so if 7th house Lord is not well placed then it may cause marak for father. Such as father may be suffering from health problems. It may also possible separation from father. If well placed then father may lives far away place or forigen place from native. Because 7th house also belong to far away place from native birthplace. Father may get success in forigen place. But if 9th house is weak and 7th Lord is strong and affiliated by functional malefic regarding 9th house then it may cause dangerous regarding life span of father. Otherwise father may be wealthy and rich due to placement of 11th from own 9th house.

5)7th house belong to wife and when 7th Lord placed in 9th house native wife may be good. Wife may be religious and traditional following lady. Native may gets his suggestions and help regarding to get success in life by right way. Native may be fortunate after marriage or wife may comes with fortune. But if it is not well placed and affiliated by malefic then it may destroying marriage happiness and pleasures regarding marriage. Native may be facing quarrel in marriage life. If badly affiliated then it cause separation. Actually 7th Lord in 9th house must be in good condition for a happy marriage life.

7)As 7th house is a kaam kona and 9th house is our moral house so it may possible Native don’t have a good moral character regarding Sexual conduct. As 7th house is kaam house and 9th house is fortune house so it may possible native is fortunate regarding kaam matters so sage suggested native may have enjoying union of many women. But it may also depending on 2nd house which belong to native sanskar. Overall it is indicating native may have good Sexual power and staima because 7th lord placed in 3rd from own house.

8)7th house and 9th house both are Travel house in a horoscope. 9th house is belong to long travel and 7th house belong to travel to far away place or forigen place so 7th house Lord in 9th house may cause native may goes for foreign place or far away form birthplace for a long time. So it may indicating native may goes forigen and gets fortune at forigen land. It may possible native goes for religious travel or for study purpose or for business purposes depending on Dasha and planet involvement.

9)But regarding mental peace it is not consider good.

10)When 7th house Lord is placed with 9th house Lord it may makes a simple Rajyyog due to combination of Kendra and Trikona. So if it is well placed then native may be fortunate regarding wealth after marriage. He may also gets money from marriage. Native may accumulate huge wealth (consider kalpurush chart where it is combination of Jupiter and Venus which a good yog for wealth). Native may be religious person and visited religious place and give good donation for religious purpose. Native wife may be lover of truth and honesty. Native may be gets good success in forigen place. Native may gets a good name and fame.
But if this combination is not good then his wife is not so good and creating problem for him. Native have many wrong desires and involving for full fill this.