1)Before knowing effect of 7th house Lord in 11th house we have to know about Seventh house and Eleventh house. As 7th lord is placed 5th from own house so you may read First house lord in 5th house.

2) According to Brihat Parasar Hora Sastra

Simple meaning of this shlok is if 7th house lord is placed in 11th house, native may be gain wealth through his wife but may has less happiness of sons etc. Native may has more daughter as children.

When 7th house lord in 11th house, native’s wife will be devoty of him. She may be beautiful. She has best conduct. Native may be getting wife via ritual marriage. She may suffering from issues at the time of child birth. 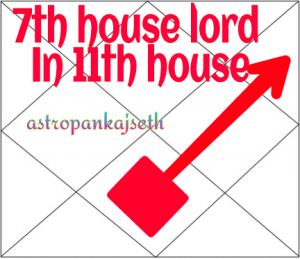 8) 7th house lord in 11th house aspects on 5th house so it gives impact on 5th house. As 7th house is dussthan for 5th house so its aspects in general way not consider good regarding child birth. According to sage it may cause birth of girl child. It may also cause evil related to sons. But if well placed then native has very good son. This good son may very helpful regarding his earning and professional life.

10) When 7th lord with 11th house lord in 11th house native is very wealthy. Native may get huge success in his professional life and may be gets a profitable partner including business partner. Native may be expanding his business in very far away place up to his birthplace or in forigen. If not well placed then not good for elder brother or native’s life span or general health.