Saravali
When Mercury in Aquarius Sign in horoscope native will be devoid of good thinking and good deeds. He will be involving in miscellaneous religious activities. He will not doing valuable things. He may be suffering from insulting by others. He will be not pure from heart and characterless in behavior. He will be fool. He will be very wicked man and enemy of his wife. He will give up and sexual pleasure. He will be very unfortunate and very timid by nature. He may be impotent and dirty looks. He will be experts in showing law and law related matters.

Yavanjatakm
Mercury in Aquarius produces a man of impure character. He will suffering from insulting and ignorant by nature. He will not experts in speech, intelligence and actions. He will be hopeless, shameless, and unlucky in sexual intercourse. He will be an enemy to his own people, saints (sadhu) and to his wife. He will be speechless man, having fears from others, dirty look and dependent man. He will be without righteousness (dharma) and without own effect in society. He will be suffering from fatigue. He may be homosexual whose exterior is covered with garlands and ornaments. 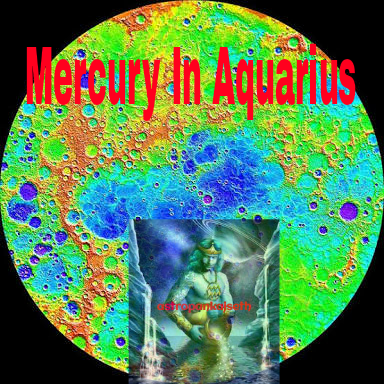 3)Mercury is karak of thinking mind and it is placed in Aquarius Sign so as per as Aquarius natural significant native may be fully materialistic thoughts. He will be more think regarding profit and money making. As Aquarius is airy by nature and fixed in significant so native will have fixed attitude but he will not steady on his thoughts. He may be very imaginative regarding making money and profits. He will be expandive by nature. He will always tends to get higher status. Aquarius is house of Saturn so it may be assumed that native may have not good mentality. He will be experts in used others regarding own profits.

5)Mercury in Aquarius Sign indicating native may be thinking he is superior from anyone. He may be assumed own self as over brilliant. He doesn’t give respect to his guru or elders because he thinks he may know more from him and not interested in teaching from guru or teacher.

6)Mercury in Aquarius Sign indicating native may have good friends and he will be experts in friendship. He may have alots of sexual desire but may be suffering regarding progeny.

7)If you want to know more about Mercury then read this link.