Brihat Jatkam
When Mercury in Pisces Sign native will be capacity to control his servants or he have such type of mentality through he desires to control others. He will be bad craftsmanship or involving in bad acts. 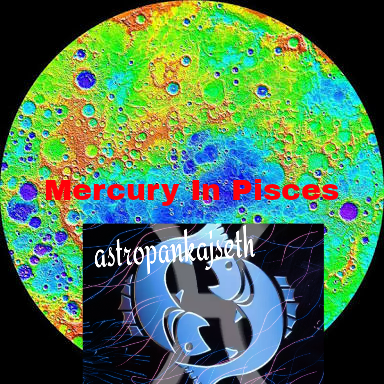 3)Mercury is karak planet of thinking mind and it is placed in a watery and dual sign. So native may be emotional and moody by mentality. He may be religious and spiritual and same time very materialistic. He may be carefree by nature. He may be confused man and not good logical talent. He is highly sensitive. He may be fantasy by thinking. As Mercury is placed in Jupiter house so native may have good conduct. He may have good morality. It is consider Mercury is debilitating in Pisces so native may be not able to use his intelligencency in proper way. He may be not good in tricks or used tricks in bad ways. He may be highly sensitive so it may be negative for his life path.

4)Mercury is karak of speech and it is debilitating so it may cause problems regarding native speech. As it is placed in 12th house of kalpurush so it may cause expense of speech so it may possible he may be very talkative of unnecessarily. Or he may be lost his speech or speech less. In simple words he mayn’t  able to use his speaking ability in proper direction or use it in negative ways.

5)Mercury is karak of study so in debilitating sign it may cause problems regarding his education. He may be suffering from mental stress, sleeping problems and unnecessary thoughts.

6)Mercury is 3rd house lord of kalpurush and placed in 12th house of kalpurush which is debilitating sign of Mercury. So it may cause sexual problems regarding to native specially related to counts of sperms and eggs. He may have not good self confidence or physical staima. He may be inclination to lives or traveling in forigen country.

8)If you want to know more about Mercury then read this link.