1) Before knowing effect of 8th house Lord in 7th house we have to know about Eight house and Seventh House.   As 8th house Lord is placed 12th from own house so you may read First house lord in 12th house.

2) According to Brihat Parasar Hora Shastra

When 8th house lord in 7th house, native may has disease related to sexual organs. His wife may be wicked. Native own self is wicked.  If 8th house lord is natural malefic then he has jealousy with wife and due to faults of his own wife he lost his life. 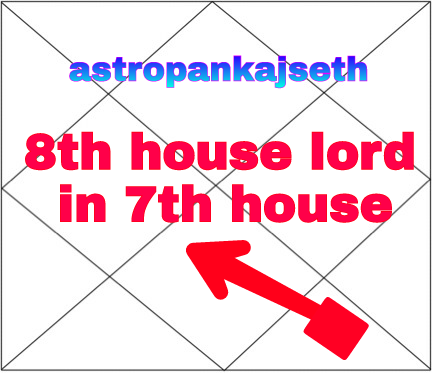 3) 8th house lord which is significant of our lifespan placed in 12th from own house (which is marak house for native) is not consider good regarding native’s lifespan. It may improve marak effect of 7th house. So native may has short lifespan (but all depending on strength of tanu bhav which is prime karak of native’s existence in this world). Native may be suffering from incurable disease or long lasting disease. Native may has deform physique by birth or any period of affected planet. As 7th house belong to a place which is very far away place from birthplace so it may possible native may be lost his life in foreign place.

4)7th house belong to kaam kona and 8th house belong moksha kona so 7th lord in 8th house is indicating native may be very sensual or having high sexual desire. So native may has illegal relationship or inclination towards such type of activities. Native may has more than one marriage. On the other hand regarding relationship with wife it is not consider good because both has a lots of misunderstanding. If 8th house lord in 7th house is relationship with natural malefic then it may cause quarrel/ separation/ divorce/ death of life partner depending on horoscope. If that planet is natural benefice then intensity of bad results may decrease.
Native’s wife may be suffering from disease or may cause financial loses for native. Native’s wife may be cause of blaming for native.

5)7th house belong to foreign travel or traveling far away place from birthplace. So 8th house lord in 7th house is indicating native may be suffering from obstacles during traveling specially foreign traveling. Native may suffering in bad situation at foreign place. It may also possible native may quite his homeland for his business purposes.

7)If 7th house and 8th house lord is well placed and enough in strength then native may gets huge material success in his life. Native may gets good fame and if in politics then going for foreign and gets fame. Native may be successful in forigen land.

One thought on “Eight House Lord In Seventh House”